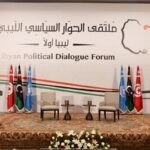 UNSMIL said in a statement on Sunday that together with the members of the Advisory Committee, it had commended the work of the Legal Committee in developing a draft constitutional basis for the holding of national parliamentary and presidential elections on 24 December 2021.

During the meeting, the Advisory Committee reviewed various proposals submitted by the LPDF members on the constitutional basis necessary for holding these elections, as stipulated by the LPDF Roadmap and called for by the Conclusions of the Second Berlin Conference, as well as by Security Council resolution 2570 (2021).

0 0
Previous : Libya’s election commission to open electoral register to voters on July 4
Next : Top US and Italy diplomats discuss Libya