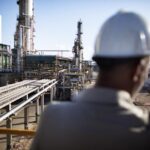 Oil production in Libya reached over a million barrels per day after the reopening of the wells and export terminals, announced the Tripoli-based government on Thursday.

In its Facebook page, the government quoted prime minister Abdul Hamid Dbeibeh as saying: “Thanks to the national staff working in the oil sector for their efforts to bring oil production back in record time to 1,133,000 barrels per day”.

He added that “work is still going on to reach the normal production rate.”

This comes after number of fields and export terminals shut down since mid-April, which led to 50% reduction of oil production with the country producing an average of 560,000 bpd.

However, the oil blockade has been lifted in July after change of leadership in the state-owned National Oil Corporation (NOC), which is the main operator of Libya’s oil production.

0 0
Previous : US commends work of Libya’s 5+5 JMC
Next : 273 new people test positive for Coronavirus in Libya