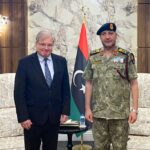 US commends work of Libya’s 5+5 JMC

U.S. Ambassador to Libya, Richard Norland, offered his praise for the work of the 5+5 Joint Military Committee during a Thursday meeting with one of the committee’s members, Mohamed Haddad, Chief of Staff of forces loyal to the Tripoli-based government.

“Those responsible for the militia clashes in recent days would be wise to follow the example set by General Haddad and others: a resounding “no” to renewed armed conflict,” Norland was quoted as saying by the U.S. embassy via Twitter.

1/2 Amb. Norland in Tripoli: “Today, I was able to meet General Haddad and offer my praise for his joint efforts with General Nadhuri, as well as the work of the JMC (5+5). #Libya pic.twitter.com/8X4DM1Lr0L