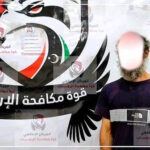 Special Forces of Western Libya’s Anti-Terrorism Force has captured an Iraqi national in the center of Gharyan south of Tripoli on suspicion of belonging to ISIS.

The force said, via Facebook, Thursday that the capture came as a result of successful intelligence, within the framework of efforts to combat terrorism and to track down elements suspected of belonging to terrorist organizations.

It stated that the person who was arrested named “N. F. L.”, an Iraqi national.

The Force explained that the arrest took place in one of the crowded residential neighborhoods in the city, where the suspect resides, and in a professional manner, without exposing people to danger.