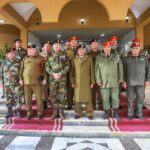 The two leaders of Libya’s eastern and western military forces discussed the unification of the country’s army during a bilateral meeting in Sirte today, said a representative for the Libyan National Army (LNA).

Lieutenant-General Khairy Al-Tamimi, who represents LNA at the 5+5 Joint Military Committee, told reporters that today’s meeting between General Abdel-Razek Al-Nadori, LNA’s General Commander, and General Mohammed Al-Hadad,was a follow-up to the one that took place a month ago.

“It comes within the framework of a program to unify the military institution and instill confidence between the two parties,” he added.

Al-Tamimi signaled positive outcome of the meeting and gave assurance that military unification is “in the right direction”.