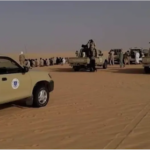 The Libyan National Army (LNA) declared the areas north of Sebha, especially Zallaf, a military operations zone, in which movement of vehicles and individuals is prohibited, said the Spokesman for the Joint Security Room – Sebha, Ali Tarshani.

Tarshani added that the implementation of the security plan developed by LNA’s Southern Region Operations Room had been initiated to eliminate terrorist and criminal groups in the region.

Tarshani confirmed, in press statements, that the second phase of LNA’s plan to secure Sebha and its outskirts would contribute to eliminating human trafficking and fuel smuggling gangs, in addition to organized crime.

0 0
Previous : HNEC Head: It is technically difficult to hold constitutional referendum and elections on 24 December
Next : El-Forjani: Failure of the vaccination file is a treason by the Dbeibah govt