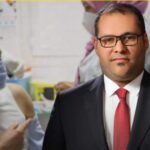 El-Forjani: Failure of the vaccination file is a treason by the Dbeibah govt

Libyan journalist Mahmud El-Forjani stated that the interim National Unity Government headed by Abdel Hamid Dbeibah has failed miserably in the file of vaccinations against COVID-19 and in providing the vaccine for all Libyans.

In a statement on his Facebook page, El-Forjani said that “the failure of the vaccination file in Libya is a treason which the Dbeibah government that  pledged to provide vaccines for everyone quickly, bears the responsibility.”

Prime Minister Abdel Hamid Dbeibah had promised, after his election last February, to provide adequate vaccinations and support Libyan isolation centers and hospitals in the face of the pandemic. However, the National Center for Disease Control announced that the epidemiological situation in Libya is catastrophic and that the isolation centers suffer from a lack of oxygen and the medical beds, as well.

The number of COVID-19 cases has rapidly increased in the past few days by 31 percent, which indicates that the Delta variant has already entered Libya, the NCDC added.