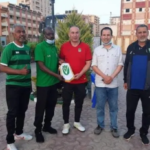 The Libyan former football star, Fawzi al-Issawi, has returned to Benghazi after a medical trip in Egypt that lasted for more than a month.

The player of the century in Libya had fallen ill while in Benghazi, after which he was admitted to the hospital, and then completed his treatment in Egypt.

It is noteworthy that al-Issawi, former player of al-Naser club, received the attention of a number of sports stars in Libya and Egypt, and was honored by the Egyptian Al-Ittihad Al-Iskandari Club, the Egyptian football star and current coach, Hossam Hassan, and his brother – the player Ibrahim Hassan.

0 0
Previous : El-Forjani: Failure of the vaccination file is a treason by the Dbeibah govt
Next : US official: Foreign forces must leave Libya