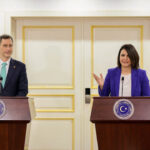 U.S. Acting Assistant Secretary of State, Joey Hood, stressed that foreign forces must leave Libya, revealing that the United States has an anti-terror network in Libya.

The American official considered Libya “a failed state in terms of governance,” expressing optimism about Libya’s ability to “finance its reconstruction, and for this reason his country is pressing hard for foreign forces to leave, holding elections on December 24, and starting rebuilding the country.”