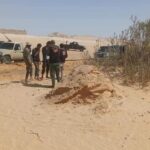 The terrorist group withdrew after being faced with an appropriate response by the brigade, the statement pointed out.

This is a clear and frank provocation aimed at escalating the armed confrontation and obstructing the ceasefire, it added.

It is clear that the extremist takfiris sought to involve LNA in clashes in order to accuse it of obstructing the peaceful settlement and holding the elections on December 24, which we look forward to as the Libyan people eagerly await, LNA explained.

“Accordingly, LNA General Command affirms its full commitment to the principles of the ceasefire agreement and respect for the national and international endeavors aimed at bringing peace to our country,” it stated.

“But at the same time, any provocation will be met with force and a firm response, and LNA operations will continue to fight terrorists until they are uprooted from all Libyan lands,” the statement concluded.