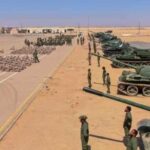 LNA repells armed attack on position in the South

Units of 128th Brigade of the Libyan National Army (LNA) repelled on Tursday at dawn an armed attack of four vehicles that tried to advance on a position north of Sokna in Jufra in the Southern region.

The vehicles have fled the area that is now being inspected by LNA forces in search of the attacking group, an LNA source revealed.