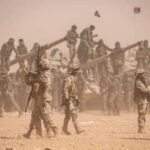 General Commander-in-Chief of the Libyan National Army (LNA), Lieutenant-General Abdel-Razek Al-Nadori, attended a big military maneuver with live ammunition, the first of its kind, with the participation of various units of the 106th Brigade, including infantry, tanks, artillery, special forces, aviation and other supportive units, according to LNA Moral Guidance Department.

The training, which was also attended by the chiefs of staff and directors of departments, was carried out over two days and prepared for several months, in which more than 4,000 militants participated, including officers, non-commissioned officers and soldiers, the Department said in a statement on Tuesday.

The training maneuver relied on raising the capabilities of the Brigade in the face of terrorism so that the military units could deal with this type of enemy that follows a different style of fighting from the regular armies, the statement pointed out.