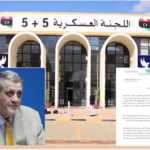 The Special Envoy of the Secretary-General of the United Nations for Libya, Jan Kubis, announced on Wednesday the start of the work of the first group of international monitors for the ceasefire in Libya on October 10, where they reside in Tripoli during the first period until the completion of arrangements related to their deployment in Sirte.

In a letter directed to the members of the Libyan 5+5 Joint Military Committee (JMC), Kubis indicated that “the Mission’s ceasefire monitoring elements have been entrusted with the task of providing support to the Libyan-led and controlled ceasefire monitoring mechanism,” according to the letter, published by the Director of the Moral Guidance Department of the Libyan National Army (LNA), Major General Khaled al-Mahjoub.

Kubis noted that the observers “will work in close cooperation with JMC and the relevant Libyan parties in accordance with the Security Council resolution,” reiterating: “the United Nations’ support for Libyan efforts aimed at implementing the action plan, in addition to unifying the military institution to advance the disarmament tracks and demobilization and reintegration as well as security sector reform in Libya.