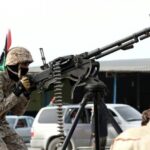 Forces of the Libyan National Army (LNA) launched on Sunday a military operation in the southern town of Qatrun after intercepting ISIS fighters in the area, LNA announced.

LNA’s Tariq bin Ziyad Brigade entered Qatrun with aerial coverage from the Air Force to pursue ISIS fighters, according to a statement by the army.

Libyan soldiers were deployed across the the town and secure all of its entrance and exit points, the army.

No clashes were reported to have taken place yet.