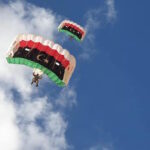 Al-Mahjoub added that the three-month training course took place at the Brigade headquarters and Tamanhint airbase.

He stressed that the trainers’ staff were national Libyan elements, and the success rate of the internationally accredited course was 70 percent.

Al-Mahjoub stated that the graduates joined the Libyan military free-fall team, stressing that coordination had been made to start another course for a batch of LNA forces members.