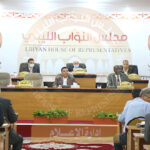 Spokesman of the Libyan House of Representatives (HoR) Abdulla Bleihiq said Monday’s session was opened with a speech by the Speaker Aqila Saleh on the previous and subsequent circumstances related to efforts to achieve the hope of Libyans to express their free will by electing a president of the state and a new house of representatives.

HoR, in its session attended by more than 90 deputies, listened to the briefing of the Head of the Civil Registry Authority on the issue of forgery in the national numbers, according to reports received by the parliament, Bleihiq stated.

He confirmed that HoR also listened to the Head of the High National Elections Commission (HNEC) about setting a date for holding the presidential and parliamentary elections and clearly defining the parties obstructing the elections for the Libyan people after the parliament fulfilled the necessary legislation and laws to hold the elections, which were supposed to be held on December 24, 2021.