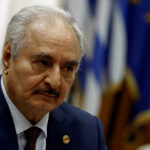 LNA voices support for protests but says it must remain peaceful

The Libyan National Army (LNA), led by Field Marshal Khalifa Haftar, has announced its support for thousands of Libya who took to the streets across the country since Friday demanding better living conditions.

In a statement on Saturday, LNA’s General Command said it declares its “full support for the popular will and for the demands of the citizens”.

The army called on the protesters to demonstrate peacefully, and urged them not vandalize public and private facilities.

It also affirmed that it will “take the necessary measures” to preserve the independence of the Libyan will “if any party attempted to unilaterally abuse it for the benefit of any foreign entity”.