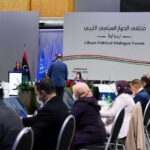 The Libyan Political Dialogue Forum (LPDF) will view four proposals for the constitutional basis of the December elections before ultimately making a decision on choosing one, announced the U.N. Mission in Libya (UNSMIL) on Tuesday.

This comes after the LPDF Proposal Bridging Committee failed to reach a compromise on a single proposal.

“The Committee agreed on a mechanism for the anticipated LPDF vote on proposal/s. The recommended voting mechanism will be submitted – along with the proposals – to the LDFP plenary,” UNSMIL said in a statement.

The bridging committee is the fourth LPDF committee to fail in reaching consensus for the constitutional basis.