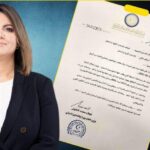 Mangoush dismisses Libya’s ambassador to the US

Najla Al-Mangoush, the Libyan Minister of Foreign Affairs, has dismissed Libya’s ambassador to Washington, Wafa Bughaighis, because of what she said was “the ambassador’s refusal to hand over her duties after the expiry of her term of office.”

In an official correspondence, Mangoush said that because the ambassador’s term in office had expired since May 30, and because she did not comply with the instructions and return to her work in Libya, and because she is not among the ministry’s employees inside the country, a decision was issued to dismiss her from her position, and her stay in the US is considered illegal.

Mangoush instructed the embassy employee, Khaled Al-Daif, to immediately take over the duties of Bughaighis, in the correspondence addressed to him and to the financial officer in the embassy.