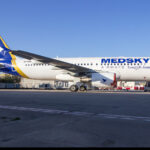 Med Sky Airways announced on Monday that it will launch its Malta to Misrata flights on 17 September. The flights will be on Saturdays and Wednesdays.

The airline company had initially announced in April that it would be launching its Misrata flights on May 5th.

Med Sky said it had based its latest launch decision on the field visit made by its specialized team and the meetings that took place with the Misrata Airport Administration.

The airline company is owned by Mohamed El-Taher Issa, a close associate of Libya’s outgoing prime minister, Abdul Hamid Dbeibeh. The company is the first to be allowed to operate direct flights between Libya and Europe through Malta for the first time since 2014.