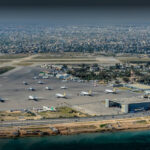 Members of 5+5 JMC meet with Turkish officers in Mitiga base, report

Members of the 5+5 Joint Military Committee met on Monday with Turkish officers whom are currently based in Mitiga military base in Tripoli, according to local press report.

Citing an “informed source”, Libyan TV channel 218 said that the committee members arrived to the base in armored cars at 12 P.M today, reportedly to discuss Turkish forces exit from Libya.

This notably comes a day after the committee released a statement, in which it called on the Libyan government to freeze military deals with all foreign countries.

0 0
Previous : MP calls on authorities to identify foreign organizations in Libya
Next : Egypt to reopen embassy in Tripoli and Benghazi, ambassador says