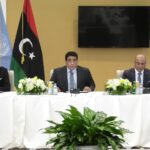 Mohamed al-Menfi, the Head of the Presidential Council, chaired a meeting for Libya’s neighboring countries yesterday on the sidelines of the 76th U.N. General Assembly in New York, according to a statement by the council.

During the meeting Al-Menfi discussed a number of Libyan issues relating elections and security with senior diplomats from Egypt, Tunisia, Algeria, Sudan, Chad and other countries.

The interlocutors also discussed mechanisms for multilateral cooperation, especially with regard to national reconciliation in Libya.

0 0
Previous : UNHCR: Over 24.000 migrants have been returned to Libya
Next : Dbeibeh praises Gharyan “historic” role in Tripoli war