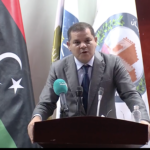 In a speech before Gharyan’s representatives, Dbeibeh praised the “historic” role in which the city played in “defending our capital”.

During the 2019-20 western Libya campaign, armed groups based in Gharyan declared loyalty to the Libyan National Army (LNA) before shifting their allegiance to the former Government of National Accord (GNA), causing the LNA to lose its control over the city.