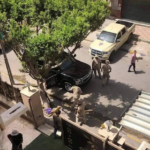 It is noteworthy that al-Shanti had issued instructions to prevent Dhaou from entering the authority’s headquarters, which prompted the Undersecretary to attack the headquarters and try to enter by force of arms, according to press sources.

0 0
Previous : 1501 people test positive for COVID, 34 others dead in Libya
Next : Aboul Gheit and Lamamra discuss developments in Libya