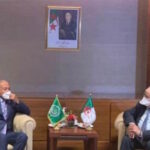 The Secretary-General of the Arab League, Ahmed Aboul Gheit, met Monday with the Algerian Foreign Minister, Ramtane Lamamra, on the sidelines of the consultative ministerial meeting of Libya’s neighboring countries, held in Algiers.

An official source of the League’s General Secretariat said the meeting mainly dealt with developments of the situation in Libya and the regional and international dealings with it, especially with the approaching date set for holding elections at the end of this year, according to press sources.

It is noteworthy that Aboul Gheit urged on Monday the Libyan parties to agree on a constitutional basis to hold elections on time, warning of the repercussions of the failure to implement the agreed-upon road map.

Aboul Gheit said, in an opening speech during the meeting of Libya’s neighboring countries that Algeria is hosting, that the Libyans are still pinning high hopes on the elections to get out of the crisis, which requires the actors to agree on a constitutional basis as soon as possible.

The Secretary General also stressed the need for mercenaries and foreign forces to leave Libyan territory because it is “necessary for the success of the transition track to stability.”