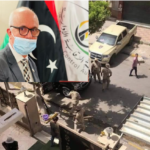 ACA Head denounce attack on the Authority HQs in Tripoli

Al-Shanti had issued instructions to prevent Dhaou from entering the authority’s headquarters, which prompted the Undersecretary to attack the headquarters and try to enter by force of arms, according to press sources.

Al-Shanti confirmed the occurrence of panic and fear among the employees and residents living near ACA as a result of the attack with heavy weapons, according to ACA.

He also appealed to the competent legal authorities to arrest Khaled Dhaou for assaulting ACA and causing injury to those present during working hours, ACA said in a statement on its Facebook page.

0 0
Previous : Aboul Gheit and Lamamra discuss developments in Libya
Next : (Exclusive) US envoy calls for involving IMF in Libya’s financial issues ahead of elections