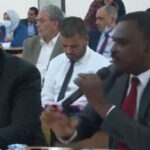 Member of the Libyan Parliament, Mohamed Lino, said that the Government of National Unity (GNU), led by Abdul Hamid Dbeibeh, replaced funerals with weddings, referring to the sums of money that GNU allocated for helping young men and women on marriage expenditures.

Lino stressed, on the Parliament’s Tuesday session, that deputies always mention the negatives of GNU, without looking at the positives.

He explained that the government had resolved the salary crisis, which had lasted for more than six years, and had introduced new power stations.

0 0
Previous : Public Prosecutor: Health Minister and Undersecretary imprisoned with sufficient evidence against them
Next : US looks forward to “full operationalization of ceasefire monitoring component” in Libya