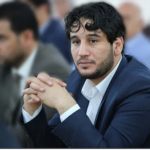 MP: Government will present proposals for Defense Minister position to the Parliament

TOBRUK – Member of the Libyan Parliament, Musbah Douma, stated that the government would present its proposals for the position of the Defense Minister and his deputy or deputies, and the role of the Parliament is to vote on them.

Douma pointed out that the Parliament may open the door for candidacy for the positions due to the exceptional circumstances the country is going through and the lack of unification of the military institution.