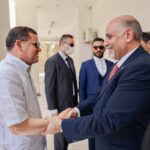 The Minister of Planning of the Libyan Government of National Unity, Fakher Buferna, announced on Wednesday that the Libyan Stock Market will be brought back to its home in Benghazi from Tripoli. The eastern city is where the Stock Market was established and launched before 2011.

Buferna thanked the Cabinet, on his official Facebook page, for the decree of returning the Stock Market to Benghazi.