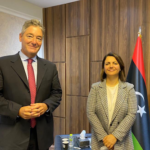 This came during a meeting between the two sides, on Tuesday, during which they discussed the latest developments and the political situation in Libya, according to a tweet by the German embassy in Libya.

The two sides stressed the need to implement the outputs of Berlin II conference, the most important of which is holding the elections on their due date next December.