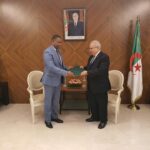 Libya’s new ambassador to Algeria, Saleh Himma, presented on Monday his credentials to Algerian Foreign Minister Ramtane Lamamra, according to a statement by Algerian foreign ministry.

During the meeting, both diplomats discussed the “relations and and cooperation between the two countries and peoples,” as per the ministry’s statement.

They also discussed “the latest developments in the political and security situation in Libya, stressing the need to redouble and coordinate efforts to achieve the goal of building democratic institutions in light of a comprehensive Libyan reconciliation that ends differences and achieves security and stability”.