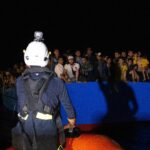 More than 400 migrants were rescued on early Sunday morning by non-governmental organizations during a 5-hour rescue operation off the coast of Libya, Sea Watch announced on Sunday.

Sea Watch said via Twitter that the rescue operation was coordinated with Resqship and SOS Mediterranee. The migrants are currently receiving care on the ships of Sea Watch 3 and the Ocean Viking.

In a 5-hour rescue operation, with the help of @resqship and @SOSMedIntl, ~400 people were rescued and are now receiving care on the #SeaWatch3 and the #OceanViking. More information to follow. pic.twitter.com/QLYiRIzRdd

According to SOS Mediterranee, the operation lasted “all night until the early morning”, adding that the NGO ships have “449 survivors onboard in total”.

Following rescue operations in the Mediterranean, NGOs tend take to the migrants to European territories as they consider Libya to be unsafe place to disembark migrants.

All night until the early morning, together with @seawatch_intl & @resqship_int, we were engaged in the critical rescue of ~400 people from a large wooden boat taking on water.

We have 449 survivors onboard in total pic.twitter.com/pSGu67wNBk