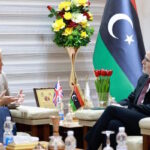 Date: Thursday, November 25, 2021
63 Views
Chairman of the Libyan National Oil Corporation (NOC), Mustafa Sanalla, met Wednesday with the British Ambassador to Libya, Caroline Hurndall, and “briefed her on the challenges facing the oil sector in Libya, most notably the low level of production due to lack of funding and scarce budgets,” according to NOC.
During the meeting, held at NOC’s headquarters in Tripoli, Sanalla stressed that the oil sector in Libya is a promising sector that encourages investment and attracts investors to enter it in order to maintain and increase production rates in the event that security continues and political stability is achieved, NOC said in a statement.
For her part, the British Ambassador “praised the role of the National Oil Corporation in stabilizing the national economy, as it is the main source of the Libyan economy, which provides hard currencies,” the statement pointed out.
“She also stressed the importance of supporting NOC and preserving its independence as a non-political technical institution and keeping it away from any tensions,” it added.
Tags:Caroline HurndallLibya oilMustafa SanallaNOC