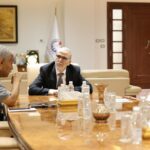 Libya’s National Oil Corporation (NOC) said on Thursday that it plans to reopen the Mabruk oilfield in the first quarter of 2023 with production up to 25,000 barrels per day.

The Mabruk field has been closed for more than seven years, after it was subjected to an attack in 2015 that cost the company $575 million in field equipment losses, NOC’s statement added.

The move came a day after the NOC said it may have to halt exports from the Gulf of Sirte, which includes Ras Lanuf and other ports such as Es Sider, Brega and Zueitina.

0 0
Previous : UN Advisor Williams will stay in her post for another month, report
Next : Parliament: Disagreement with HCS persists over dual citizenship for election candidates