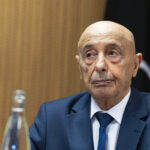 Libya’s House of Representatives said on Thursday that it failed to reach agreement with the High Council of State on eligibility requirements for elections candidates during the two-day talks between the leaders of both chambers in Geneva.

Speaker of the House, Aguila Saleh, and Chairman of the Council, Khaled Al-Mishri could not reach an agreement on whether or not Libyans with dual citizenships should be allowed to run for public office, according to a statement by the House.

“Most of the points of contention were agreed upon between the committees of the House of Representatives and the High Council of State, with the exception of the right of dual nationals to run for the presidency and sovereign positions,” reads the statement from the House.

“It was agreed to refer the matter to the two chambers for final decision,” it added.

Nevertheless, both sides agreed to form a congress, which would be located in Sabha, while the House will remain as legislative body based in Benghazi. The seats for the new congress will be equally distributed between the three historic regions of Libya: Cyrenaica (east), Tripolitania (west) and Fezzan (south).

The statement of the House echos the remarks made by U.N. Advisor on Libya, Stephanie Williams, who facilitated the negotiations between Saleh and Al-Mishri, shortly after the talks ended.

Williams has touted the results of talks as “unprecedented consensus” while acknowledging that “despite the progress in this week’s negotiations between the heads of the respective chambers, disagreement persists on the eligibility requirements for the candidates in the first presidential elections.”

Tags:High Council of StateHouse of RepresentativesLibya