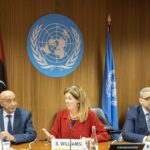 The leaders of Libya’s House of Representatives and High Council of State have reached today “unprecedented consensus” after holding two-day talks in Geneva under facilitation from the United Nations, announced Stephanie Williams, a special advisor to the U.N. Secretary-General.

Aguila Saleh and Khaled Al-Mishri, who lead the aforementioned chambers respectively, have agreed on a number of long-standing issues, including, the designation of the headquarters and distribution of seats for the two chambers of the legislative authority, according to Williams.

They also reached agreement on “division of responsibilities among the president, prime minister, cabinet and local government; the specific form of decentralization, including the delineation of the number of governorates and their powers; a revenue allocation mechanism for the different levels of government; and increased representation for cultural components,” said the U.N. diplomat.

However, Williams pointed out that “despite the progress in this week’s negotiations between the heads of the respective chambers, disagreement persists on the eligibility requirements for the candidates in the first presidential elections.”

“While the progress secured during three rounds of consultations in Cairo and this round in Geneva is significant, it remains insufficient as a basis to move forward towards comprehensive national elections, which is a genuine desire of the Libyan people,” Williams explained.

She urged the two chambers to “overcome the pending disagreement as soon as possible”. She also called on all actors and parties in Libya not to take “any precipitous action”, and emphasized that “calm and stability must be maintained.”

Williams is set to compose “a full report on the proceedings” and present her recommendations on “alternative ways forward” to the U.N. Secretary-General.

My statement on the closure of the High-Level Meeting on the Libyan Constitutional Track attended by the Speaker of the House of Representatives and the President of the High Council of State: https://t.co/kddWNo8FQc

0 0
Previous : Madbouly stress importance of charting new Egyptian-Algerian trade routes other than Libya’s land one
Next : UN Advisor Williams will stay in her post for another month, report