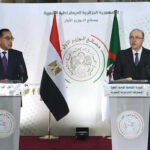 Egyptian Prime Minister Mostafa Madbouly stressed Wednesday the importance of charting new trade routes to facilitate the transfer of goods between Egypt and Algeria other than the land route passing through Libya due to the current tensions there, according to a statement released by the Egyptian cabinet following Madbouly’s meeting with his Algerian counterpart.

Egypt and Algeria signed 12 agreements in the fields of industry, investment, and exports, Algerian Prime Minister Ayman Ben Abdelrahman said on Wednesday at a press conference with his Egyptian counterpart Mostafa Madbouly, currently on a visit to Algeria.

The accords were signed during the meeting of the eighth round of the joint higher committee in Algiers. The meeting was attended by Egyptian and Algerian ministers and officials, including the ministers of energy, higher education, housing, and trade.