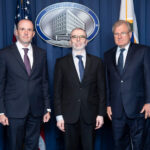 Norland: Sanallah is under pressure from multiple sides

“Sanallah was under tremendous pressure from various parties to do something with this money,” Norland said during an interview with Libyan broadcaster Al-Wasat.

The American diplomat said that it would have preferable if transfer wasn’t done until a “mechanism is in place to provide confidence that the proceeds will be spent on the intended purposes”.

“We are working in cooperation with the Economic Working Group, Egypt, the European Union, the United Nations, and the United States to put forward some ideas with Libyan partners on the mechanism for managing oil revenues,” he said before clarifying that no final results have been reached.