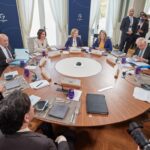 Top diplomats of G7 countries called on Libyan stakeholders to hold “free, fair and inclusive Presidential and Parliamentary elections as soon as possible”.

This comes following a meeting on Saturday between the High Representative of the European Union and foreign ministers of Canada, France, Italy, Japan, the United Kingdom, the United States and Germany, where the summit was held.

In a joint statement, the chief diplomats also called on all parties to “refrain from violence and to preserve the unity of the country and its institutions.”

They urged “full resumption of oil production in Libya” and called upon all actors to refrain from “using it as an instrument of political confrontation.” However, they also stressed “the need for oil revenues to be transparently managed, with public expenditures decided and executed through a clear budgetary process for the benefit of all Libyan people.”

The foreign diplomats reiterated their support for U.N. Advisor on Libya Stephanie Williams, but called upon Secretary-General Antonio Guterres to “promptly” appoint a new U.N. envoy.

Read the final communiqué of the G7 Foreign Ministers👇🏻https://t.co/eKVP8LEvAy