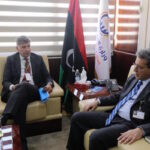 Date: Tuesday, June 21, 2022
95 Views
Libyan Oil Minister, Mohamed Aoun, discussed with Director General of Eni North Africa – Libya branch, Antonio Bolsari, the possibility of future cooperation in developing offshore and onshore oilfields.
This came in a meeting in the presence of the company’s deputy director, Wanis Al-Ruwaimi, and the director general of the General Department of Technical Affairs at the ministry, Mustafa bin Issa.
Aoun provided an overview of the history and role of the ministry in the oil law and the law establishing the National Oil Corporation, which regulates the relationship between the ministry and the corporation and its subsidiaries
He also provided an overview of the prospects for the Libyan oil industries in the future, whether in the discovery or production.
Aoun stressed the Libyan state’s encouragement of international companies to participate in the development of the sector, as well as alternative energy, in line with the aspirations of the international community to reduce carbon emissions.
For his part, Baldassiri gave an overview of what Eni had achieved. From oil and gas discoveries in recent years around the world, and its experience and know-how in this field.
He also expressed the company’s desire to explore some marine and land areas in Libya in cooperation and partnership with BP.
Tags:EniLibyaOil

0 0
Previous : Al-Mishri says he’s ready to negotiate with Saleh in Gadamis
Next : 590 migrants disembarked back on Libyan shores in a week – IOM