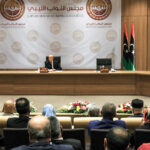 Libya’s House of Representatives will not be discussing the bill of state budget in today’s session, and will, instead, discuss a bill on direct election of future president, announced Abdullah Blehaq, a spokesman for the parliament.

Blehaq explained that the government formally requested from the parliament to postpone budget talks in order to make amendments to the budget.