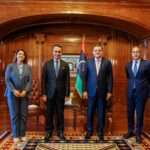 The two discussed “a number of common issues between the two countries, and this meeting will be followed by an expanded meeting between the Libyan and Italian sides,” according to a statement by the government.