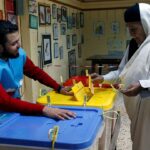 The High National Election Commission (HNEC) announced on Monday that voter registration deadline for the upcoming general elections on December 24 is extended to August 17.

The HNEC also set August 18 as the date for the opening voter registration process for Libyans living abroad, which will continue until September 15.

The total of registered voters has reached 2.6 million, since the HNEC opened registration in July 4.