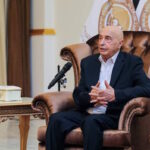 Parliament Speaker: We do not accept defending continuation of GNU

The Libyan Parliament Speaker Aguila Saleh said Monday “We do not accept defending the continuation of the Government of National Unity (GNU).

Saleh added, during a speech at the official parliament session, that the government’s term had ended since December 24.

The Speaker announced the formation of a technical committee by agreement between the parliament (House of Representatives) and the High Council of State (HCS) to amend some articles of the draft constitution.

Saleh stated that HoR and HCS cannot re-draft the constitution, and the matter should be left to specialists.

He emphasized setting an inevitable date for holding the elections, even with the laws set by the House of Representatives.

Saleh continued, “We must realize that the matter related to the executive authority is a priority now, as it is concerned with providing food, water and medicine to the people.”