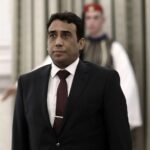 President of the Libyan Presidential Council, Mohamed al-Menfi, welcomed on Saturday the “rapprochement between the House of Representatives (HoR) and the High Council State (HCS) regarding the constitutional path.”

“We urge them to work to reach an agreement on the remaining points of contention to go to elections as soon as possible,” al-Menfi said.

It is noteworthy that delegates of HoR and HCS had reached “initial consensus” on 137 articles of the country’s constitution draft after the second round of talks in Cairo ended on Friday, according to the United Nations Support Mission in Libya.

The delegates, who are part of a UN-backed Joint Committee, held “extensive consultations and positive discussions” about constitutional track over the past six days, stated U.N. Advisor on Libya Stephanie Williams, which she delivered at the end of Friday session.