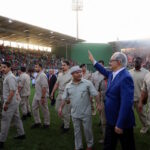 A big celebration was held Tuesday, at Benina Stadium in Benghazi, of the eighth anniversary of the Dignity Operation, conducted by the Libyan National Army (LNA) against terrorist groups in 2014.

The celebration witnessed the attendance of a large crowd and the families of the martyrs, who sacrificed their lives for the homeland against terrorist groups.

The celebration also witnessed heritage, sports and military parades, in which the Libyan Red Crescent Society and Scouts participated.

0 0
Previous : Bashagha government start working from Sirte
Next : Haftar: Addressing crises in Libya will not succeed unless it stems from popular will