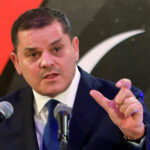 PM Dbeibeh: Facebook is source of strife, We will not hand over power

Prime Minister of the Libyan Government of National Unity (GNU), Abdul Hamid Dbeibeh, has described Facebook as a source of strife after discovering the forgery of his certificate, which he claimed to have obtained from the Canadian University of Regina.

Dbeibeh added that he would “complete” and would not hand over power until “a constitution is drawn up and real elections are held.”

It is noteworthy that the University of Regina had confirmed, in response to Al-Anwan newspaper inquiry, that no one with the name Abdul Hamid Dbeibeh had received a Master of Science or any other credential from it.

Dbeibeh had been accused of lying about his education in the resume he submitted before the Libyan Political Dialogue Forum (LPDF) prior to his appointment as a prime minister this year.