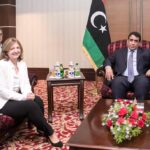 Mohammed al-Menfi, the chairman of Libya’s Presidential Council, and French Ambassador Beatrice du Hellene discussed on Thursday the upcoming general elections in December, withdrawal of all foreign forces and mercenaries out of Libya and unification of the country’s military institution.

According to a statement by the council’s spokeswoman Najwa Wheba, al-Menfi affirmed the council’s commitment to “unifying all state institutions and doubling work to achieve comprehensive national reconciliation among the people of the country.”