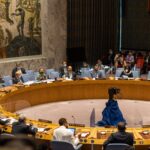 The United Nations Security Council concluded its ministerial-level meeting on Libya today by demanding the withdrawal of foreign forces and mercenaries out of Libya and expressing support to the Libyan authorities charged with leading the country up to the national elections in December 24.

The French Mission to the U.N., which chairs the council’s presidency for the month of July, released a presidential statement outlining the key points of the Libya meeting.

“The Security Council expresses its support for the interim Presidency Council and the interim Government of National Unity as the Government of Libya charged with leading the country up to Presidential and Parliamentary national elections on 24 December 2021,” reads the presidential statement.

“The Security Council stresses the importance of free and fair Presidential and Parliamentary elections that are inclusive and credible and underlines the importance of arrangements to ensure the full, equal and meaningful participation of women and the inclusion of youth.”

“The Security Council strongly urges the relevant authorities and institutions, including the House of Representatives, to take immediate action to clarify the constitutional basis for elections and to enact legislation, as necessary, to allow the High National Election Commission to have adequate time and resources to prepare for National Presidential and Parliamentary elections”.

The U.N. Security Council threatened to sanction anyone who is found to be “engaging in or providing support for other acts that threaten the peace, stability or security of Libya, or obstruct or undermine the successful completion of its political transition and underlines that such acts could include obstructing or undermining those elections”.

The Council also “strongly” urged all Member States, all Libyan parties and all relevant actors to “respect and support the full implementation of the 23 October 2020 ceasefire agreement, including through the withdrawal of all foreign forces and mercenaries from Libya without delay.”

The Security Council welcomed the completion of the independent audit of the Central Bank of Libya (CBL) and reaffirmed its intention to “ensure that assets frozen pursuant to paragraph 17 of resolution 1970 (2011) shall at a later stage be made available to and for the benefit of the Libyan people.”