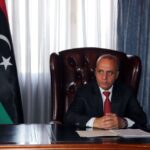 Abdulla al-Lafi, the Presidential Council’s Vice President, has publicly confirmed reports of a proposed plan to postpone the election until March 2022. However, he stressed that the plan is a “personal initiative” and does not represent any political body.

Speaking to Qatar-based Al-Jazeera yesterday, al-Lafi said he made the proposal due to the “political deadlock” that the country is facing ahead of the elections on December 24.

He pointed out the current dispute between the House of Representatives and the High Council of State over electoral laws, which he says must be resolved to ensure the success of the elections.

“This initiative aims to hold a special meeting attended by all members of High Council of State and members of the [House] to search for a general and comprehensive consensus on controversial issues,” he said.

“This is a personal initiative and has nothing to do with any political body, not even the House of Representatives or the High Council of State,” he added.

Reports of the plan emerged earlier this week and sparked controversy as many view elections delay to be a violation of the peace agreement signed in 2020.

Mussa Al-Koni, a member of Libya’s Presidential Council, implicitly confirmed the reports on Sunday as he took to Twitter to publicly distance himself from the proposal.